Chumps for Trump will be blubbering ... Biden's Economic Performance Has Proved Unbeatable

What more can one say other than Trump chumps can expect golden showers of Trump lies to intensify.

Biden's Economic Performance Has Proved Unbeatable
No first-year president going back to Carter comes close to matching the current White House occupant’s No. 1 or No. 2 ranking in each of 10 key measures.
By
Matthew A. Winkler
+Sign Up
December 20, 2021, 5:00 PM GMT+7 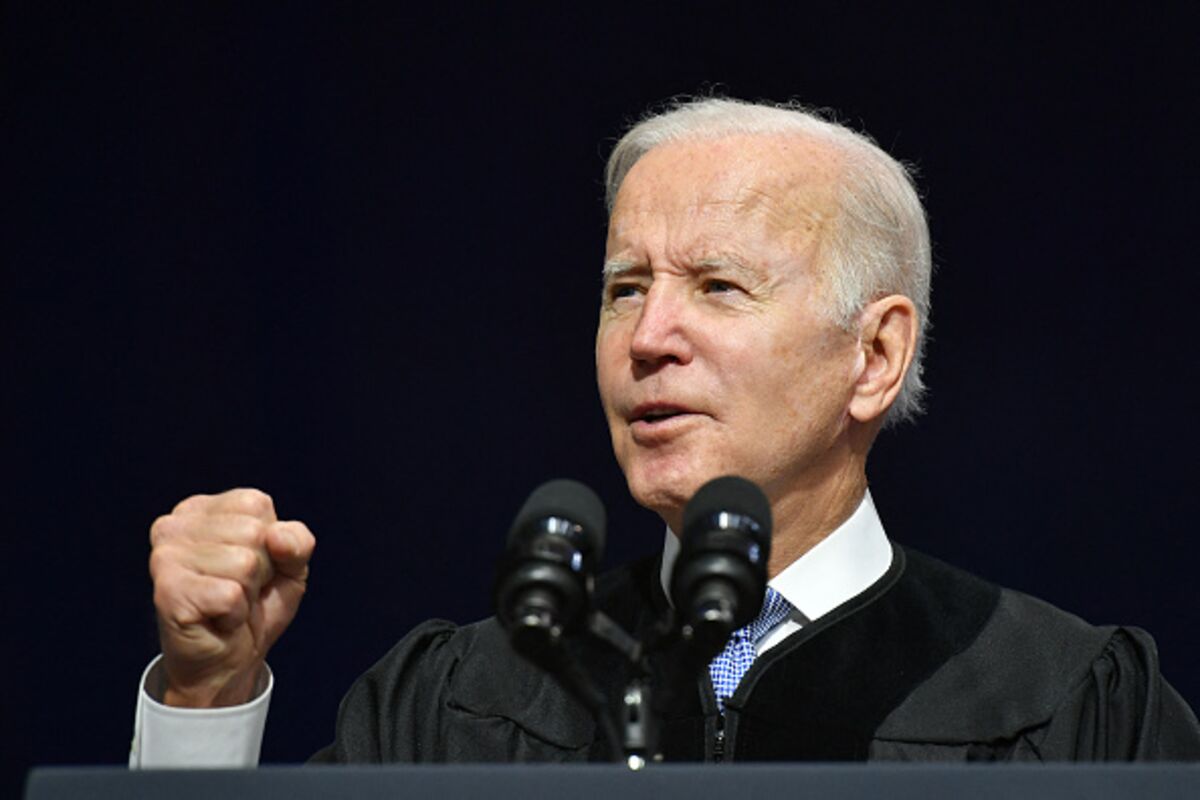 President Joe Biden has the economy and markets humming.


U.S. financial markets are outperforming the world by the biggest margin in the 21st century, and with good reason: America’s economy improved more in Joe Biden's first 12 months than any president during the past 50 years notwithstanding the contrary media narrative contributing to dour public opinion.
Exceptional returns from dollar-denominated assets, especially the S&P 500 Index in both absolute terms and relative to its global counterparts, can be attributed to record-low debt ratios enabling companies to reap the biggest profit margins since 1950. Corporate America is booming because the Biden administration's Covid-19 vaccination programs and $1.9 trillion American Rescue Plan reduced the jobless rate to 4.2% in November from 6.2% in February, continuing an unprecedented rate of decline during the Covid-19 pandemic.

Consider that real, or inflation adjusted, gross domestic product surged at an average annual rate of 5.03% in each of the first three quarters of 2021, and is poised to expand 5.6% for the year based on the average estimate of more than 80 economists surveyed Bloomberg. If that forecast proves accurate, it would be more than 2.8 times the average between 2000 and 2019 and double the average since 1976.
All of which makes Biden's first year in the White House the standout among the seven previous presidents, based on 10 market and economic indicators given equal weight. According to data compiled by Bloomberg, no one comes close to matching Biden's combination of No. 1 and No. 2 rankings for each of the measures:
Per capita disposable income, which rose 1.08% this year, is the only comparable weakness for Biden, trailing Donald Trump’s 2.17%, George W. Bush’s 2.01%, Jimmy Carter’s 1.80% and Ronald Reagan’s 1.42%.
https://sponsored.bloomberg.com/article/qfc/seizing-qatars-wealth-of-opportunity
GDP growth in every incoming administration during the past four decades never exceeded 2.74% until 2021. Biden is now positioned to surpass Carter (5.01%) as the GDP champion of presidents since 1976. Much of the credit goes to The American Rescue Plan, which poured $66 billion into 36 million households and reduced the child poverty rate by 50%, helping the U.S. recover faster from the pandemic than most other nations.
Leading the Pack
The economy is poised to expand 5.5% in Biden's first year as president

Sources: Commerce Department, Bloomberg
The forecast for Biden is the median estimate of more than 80 economists surveyed by Bloomberg.
Corporate America was never healthier than under Biden in 2021. Efforts to support consumers flowed through to America’s companies, which are enjoying profit margins of around 15%, the widest since 1950, according to the Bureau of Economic Analysis. Non-financial profit increased 39.3%, making Biden No. 1 among eight presidents with Obama a distant second at 21.6%.
Earnings Bonanza
Corporate profits have boomed in Biden's first year in office

The boom times have allowed companies to reduce net debt as a percentage of earnings before interest, taxes, depreciation and amortization to the lowest since data was compiled in 1990 for companies in the S&P 500. All this helps explain why the stock market under Biden is second only to George H.W. Bush of any incoming president since Carter.
Bull Market
Biden edges Obama for second-best first-year stock performance

Americans are certainly feeling good. Consumer credit surged $196 billion through October, a record under Biden that is 27% more than the increase under No. 2 Donald Trump ($154 billion). Although some of the gains reflect a rebound from 2020 when the pandemic caused many consumers to retrench, they wouldn’t be adding debt if they weren’t feeling confident.
Feeling Flush
A surge in credit borrowing by consumers signals high economic confidence

The way the jobs market is improving, it’s not hard to see why consumers are in such a good mood. Biden is the only president over the past half century with robust increases in non-farm payrolls (4.3%) and manufacturing jobs (2.6%), approaching the gains enjoyed by Carter in general employment (4.6%) and factory workers (3.9%). Trump, who inherited the longest expansion in modern times and said in 2015 he would “be greatest jobs producer that God ever created,” is an also-ran, with non-farm and manufacturing payrolls inching up 1.4% and 1.3%, according to data compiled by Bloomberg.
Jobs Boom
Only Carter tops Biden for best growth in payrolls in their first year in office

Returning to Factories
Manufacturers have added more workers under Biden

Companies need all the workers they can get. U.S. business output, a measure of productivity, increased 4.4%, putting Biden ahead of every predecessor except Carter, where it gained 6.25%. No wonder confidence among chief executive officers of the largest U.S. companies soared to a record this year as expectations for hiring, capital investment and sales improved. The Business Roundtable's CEO Economic Outlook index, launched in 2004, rose 10 points to 124 in the fourth quarter, the highest in 20 years.
Getting Back to Work
Business output is surging under Biden as the economy recovers

America’s economy is the envy of the world, looking at the foreign-exchange market. The dollar has strengthened 7.37% this year. That is the most under a first-year president since the greenback gained 17.8% for Reagan, according to data compiled by Bloomberg.
The Mighty Greenback
America's currency has gotten stronger under Biden

In another sign that the U.S. economy is a global leader under Biden, U.S. stocks outperformed the world equity market by 6.3 percentage points, the widest advantage since 1988, when George H.W. Bush was in the White House, according to data compiled by Bloomberg.
Beating the World
U.S. stocks are generating higher returns than the global equity market

The good times may extend into 2022. Biden's bipartisan $1.2 trillion Infrastructure Investment and Jobs Act bodes well for the economy and American labor because it will rebuild the nation's deteriorating roads and bridges as well as fund climate and broadband initiatives that create jobs. Even Senate Minority Leader Mitch McConnell, who said his priority was preventing the Biden agenda, voted for the law along with 18 fellow Republicans.
https://sponsored.bloomberg.com/immersive/one-bangkok/life-experiences-that-matter
Sponsored Content
Live Your Dream in Asia's Most Vibrant City
One Bangkok

Biden, like Carter, now faces the political fallout of the accelerating inflation from global supply chain breakdowns associated with the pandemic even though maintaining stable inflation and interest rates are the primary responsibility of the Federal Reserve, and the Fed said it's prepared to tighten monetary policy in 2022.

Biden, unlike Carter, benefits from the $29 trillion U.S. debt market. In contrast to the 1970s and early 1980s, confidence in the Fed’s ability to get inflation back under control is unimpaired, reflected in the yield on the benchmark 10-year Treasury note fluctuating below 1.7% as inflation hovers at 4.1%. When Carter was in the White House, investors lost confidence in the Fed, evidenced by the 10-year yield rising to 12.6% with inflation reaching 9.65%.
The clear message from the market that tells all other markets what to do is that the people with the most at stake are betting on the Biden economy.
Click to expand...