Tesla not on the list? ... Ford and Toyota top self-driving technology league table

Tesla was not on this list of leading companies in autonomous driving.

Is Elon Musk a bullshitter or what?

Ford and Toyota top self-driving technology league table
Both ahead of IT giants in patent terms, as traditional techniques come into focus 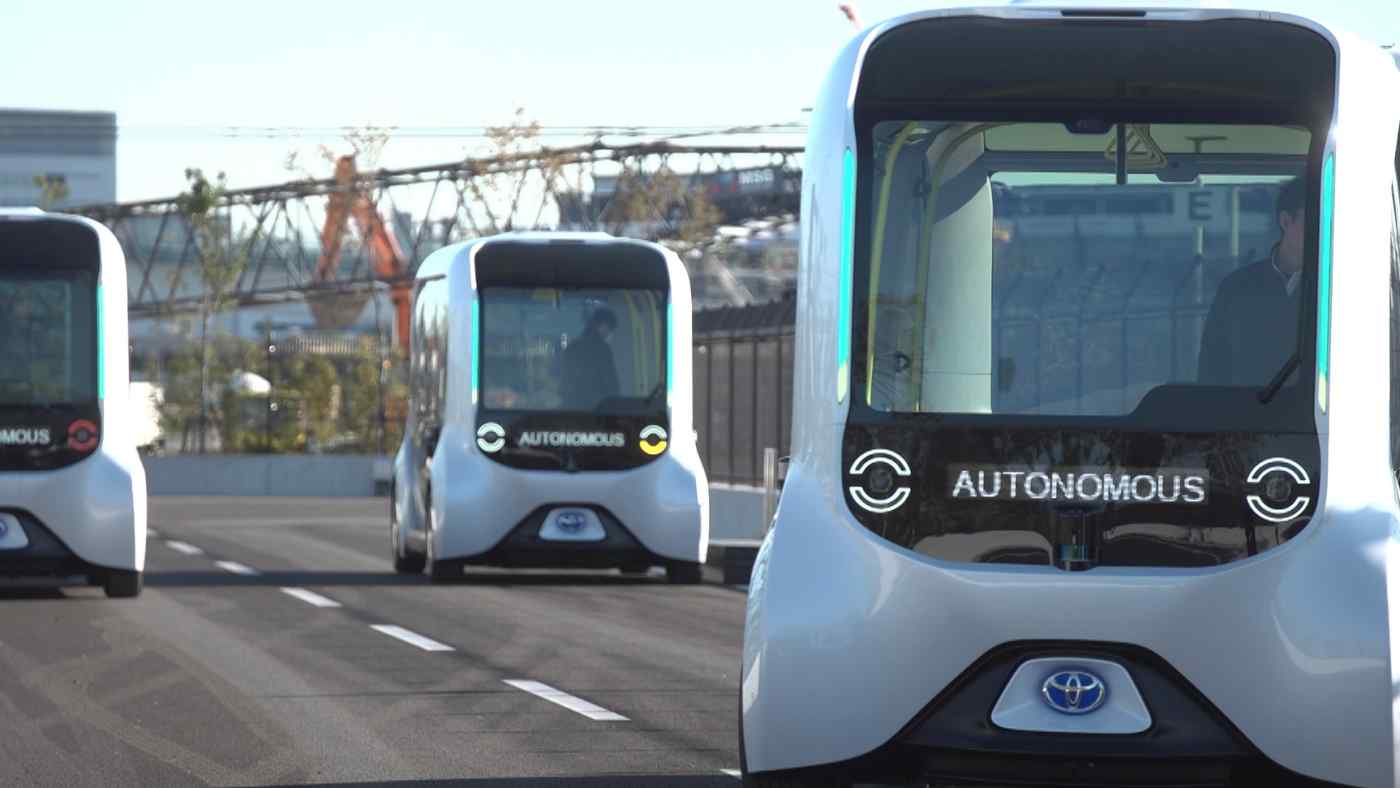 Toyota -- which is developing the e-Palette, an electric vehicle for autonomous mobility -- was found to be very competitive compared to its global peers in terms of patents. (Photo courtesy of Toyota)
RYO ASAYAMA, Nikkei staff writerMay 22, 2021 14:05 JST
TOKYO -- Leading carmakers such as Ford Motor and Toyota Motor are catching up with tech giants in the global race to develop self-driving technology as indicated by new patent data.
The two companies claimed the top two positions on a list of most competitive firms in terms of patents related to autonomous driving technology. The list was compiled by Nikkei and based on a survey of patents registered in the U.S. by the end of January conducted by Patent Result Co., a Tokyo-based company that analyzes such licenses.
Ford and Toyota have overtaken Waymo, the autonomous car company owned by Google's parent company Alphabet, which topped the previous list made in July 2018.

As self-driving technology edges closer to practical use, automakers are now threatening to one-up IT powerhouses that once led the pack, given their expertise in conventional car manufacturing.
A total of 12 Japanese companies including Sony as well as major carmakers like Toyota, Honda Motor and Nissan Motor, were among the the top 50 on the list. But Japanese players are still trailing their U.S. and Chinese rivals in terms of total distances covered in test driving on public roads in the U.S.
In the survey commissioned by Nikkei, Patent Result analyzed the competitiveness of a patent by the number of times it was cited in reports by international organizations, the number of times it was challenged by other companies and the number of appeals filed in relation to it. Nikkei then created the list that showed a company to be more competitive the higher it scores.
Ford topped the list with a score of 6,054 with 1,195 patents in force, followed by Toyota which notched up a score of 5,349 on 1,705 patents. Waymo slipped to third place with a score of 4,895 on 582 patents. 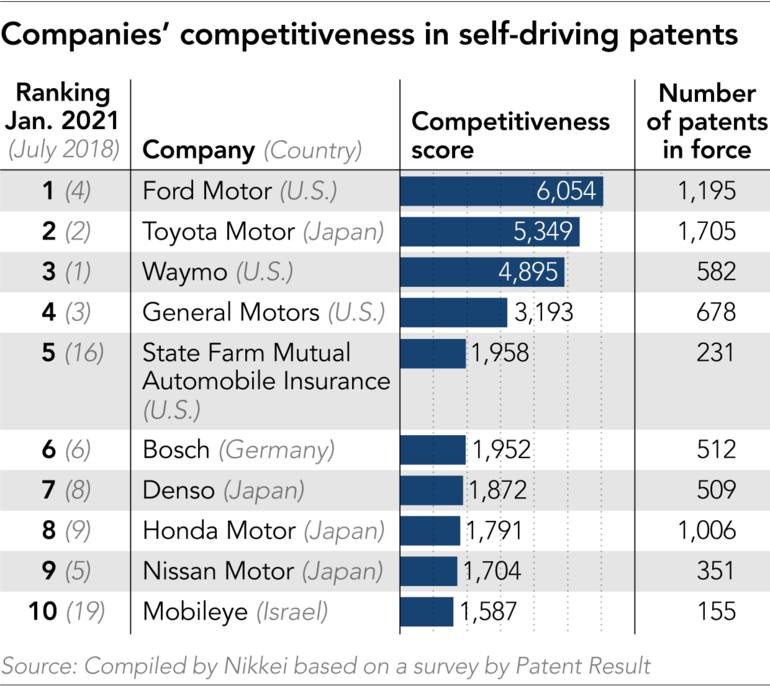 Established carmakers and car parts suppliers took seven of the top 10 slots. Ford's score was 260% higher than in the previous survey, while Toyota's jumped 140%. Waymo also fared well, boosting its score by 70% this time.
Toyota and Ford have overtaken Waymo by increasing their autonomous driving patents sharply. Both companies own 2.5 times more patents in force now than they did back then. The number of patents owned by Waymo also increased, but by a less impressive 80%.
Another reason behind the advance of conventional car manufacturers is the large numbers of patents they own in traditional car technologies. As self-driving technology has become more practically applicable, these patents have been more often cited and targeted in appeals.
With regard to the competitiveness of drivetrain technology, Toyota came on top with a score of 3,467 points, followed by Ford which scored 3,137. Waymo fell behind with a score of 2,486 points.
Ford and Toyota boast highly competitive technologies in adjusting motor output and building steering systems. In particular, Ford is way ahead of rivals in autonomous parking technology with a related score of 1,115 points, three times and five times higher than those of Toyota and Waymo respectively.
Ford has surged to the top in this area by acquiring Quantum Signal AI, a company focused on mobile robotics, modeling and simulation, in 2019. The automaker is on track to equip its vehicles with the technology in the not-so-distant future, given that it successfully demonstrated it in the U.S. in 2020.
Nonlife insurance provider State Farm Mutual Automobile Insurance was ranked fifth, thanks to its competitive sensor technology used in collecting information about self-driving vehicles via the internet and assessing the conditions of vehicles.
Its sensor-related patents were cited 2,552 times by inventors of patented autonomous driving technologies, 70% higher than the comparative figure for Toyota. Even though the insurer owns only 231 patents, one seventh of Toyota's, the quality of its patents is regarded with high esteem because sensor technology is at the heart of autonomous driving.
Chinese and South Korean companies also have established respectable presence among the top 50 players. In the previous survey, only one South Korean company, Hyundai Motor, was on the top 50 list. This time, however, five South Korean and two Chinese companies made it to the list. Baidu, the largest internet search engine in China, was ranked 23rd and NIO, a multinational electric vehicle manufacturer headquartered in Shanghai, 35th.
Some IT giants have dropped out of the race. Uber Technologies completed the sale of its autonomous driving unit, Uber Advanced Technologies Group, to self-driving car startup Aurora Innovation at the end of January.
Lyft announced at the end of April it will sell its autonomous vehicle division to Toyota. Some IT companies are withdrawing from the market following some high-profile accidents in recent years that had attracted bad media coverage.
Click to expand...

Staff member
Did it even look at Tesla patents or only those from conventional car companies because I smell bullshit!

Calm down denizens. Tesla doesn't use patent protection so there will never be a comparison on ingenuity between Tesla and others.

"Elon Musk announced Thursday he had released all of the electric carmaker Tesla's patents, as part of an effort to fight climate change. In a blog post, the colorful billionaire founder of Tesla promised the company "will not initiate patent lawsuits against anyone who, in good faith, wants to use our technology." "

Staff member
So your OP doesn’t make any sense.

HBS Guy said:
So your OP doesn’t make any sense.
Click to expand...

Please try to keep up or Elon Musk will eat your lunch.

No. My OP is 100% correct. Your intellectual constipation does not change the facts.

If Tesla's autonomous driving was such a success and there were no patents on Tesla's technology why would any of the other entities need to be doing any research?

The fact that Tesla has not patented some of its technology doesn't mean that it is not using other means to prevent its intellectual property from being used by others.

A number of Teslas have crashed while using auto pilot while no other brands have reported such crashes. Tesla has also killed a pedestrian while in auto pilot.

This is reportedly the world’s first pedestrian fatality associated with a Tesla while it was on Autopilot.

There have been other reported Autopilot-engaged fatalities that involved car drivers, and indeed corresponding lawsuits lodged at Tesla in some of those cases, but none as yet that seem to involve a pedestrian death.
Click to expand...

Staff member
Not to be trusted, for sure. Take some of the drudgery out of long distance driving for sure. Improvements in AI will see self driving take a giant leap forward in reliability tho.

Squire said:
If Tesla's autonomous driving was such a success and there were no patents on Tesla's technology why would any of the other entities need to be doing any research?
Click to expand...