Is a temperature of 50+ deg C possible in Canada today or tomorrow?

Higher temperatures are expected as the morning progresses.

This is diabolical. Canada might have some of the hottest temperatures on earth for this time of year.

AGW is here and it's unstoppable.

Could it get to 50+ deg C today, afternoon Canada time or will it get even hotter on Tuesday

Canada has recorded the highest temperature in its history after a village in British Columbia reached 115 degrees Fahrenheit on Sunday.

Temperatures in Lytton, B.C., surpassed the previous national record of 113 F (45 C) set on July 5, 1937, in Saskatchewan, according to Environment Canada.


"Did we read this correctly... you're saying all-time maximum temperature for all 10 provinces for anytime of the year? That is phenomenal!" tweeted the National Weather Service of Missoula, Montana.
Click to expand...

More heat is coming to North America. Records broken yesterday will be broken again today and then probably rebroken the next day.

'We're going to have to get used to this': Pacific Northwest scorched in dangerous, record-breaking heatwave
Elinor Aspegren
USA TODAY

Records set and broken in one city. A more-than-century old record broken in another.

The entirety of the Northwest is baking under triple-digit heat this weekend, and Sunday was no relief from the heat for most of the region. Records in many cities were broken both Saturday and Sunday and were set to be broken again on Monday.

On Saturday, Portland had the hottest day ever recorded in the city, reaching 108 degrees Fahrenheit Saturday afternoon, according to the National Weather Service, just over the previous record for Oregon’s largest city of 107, a mark hit in 1965 and 1981.

Just south of the Oregon city,Salem shattered its all-time heat record Sunday, reaching a sweltering 112 degrees. The previous record of 108 degrees was set in 1981, 1941 and 1927, according to David Bishop, a meteorologist with the National Weather Service in Portland. ...
Click to expand...

Staff member
My bit of Tassie will be OK.

The previous day Sunday was a record of 46.1 deg C which is now surpassed.

What will happen on Tuesday as massive amounts of heat are stored in roadways, concrete, and buildings?

It will be interesting to see how high the night-time minimums were.

North-west US scorched by hottest day yet The cities of Portland and Salem in Oregon and Seattle in Washington set new temperature records on Monday In Salem, Oregon's state capital, temperatures reached 47.2C, the hottest since record-keeping began in the 1890s. Seattle-Tacoma International Airport set an all-time high temperature of 41.1C, breaking the record set one day earlier. Portland also broke the previous day's record of 45C at the airport.

Is 50+ possible within days?

This is 4+ C above the previous record.

The chart in the tweet below appears suspect because it shows a small jump after 23:00. Note the time 2300 also which is suspect unless it is because of the 6 hour time difference East to West in Canada which could make the time in the measured zone 17:00 which is more credible. 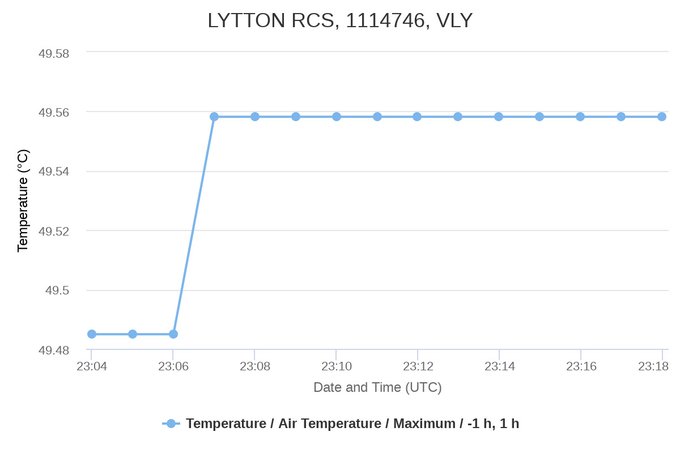